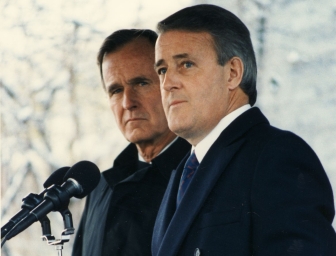 Mr. Mulroney also served as co-chair of the United Nations World Summit for Children, and his government played leading roles in the campaign against apartheid in South Africa, the international response to the Ethiopian Famine, the creation of Le Sommet de la Francophonie, the reunification of Germany, and the liberation of Kuwait in the First Gulf War.

For his many accomplishments as a world leader, Mr. Mulroney has received numerous prestigious awards, including Canada’s highest honour, the Companion of the Order of Canada, as well as the highest honour of the Government of Québec: Grand officier de l’Ordre national du Québec. He has also received the highest recognition from the following governments for his leadership in vital matters affecting their nations: Haiti – Grand-Croix de l’Ordre national Honneur et Mérite (1994); Ukraine – Order of Kniaz (King) Yaroslav the Wise, First Class (2007); Japan – Grand Cordon of the Order of the Rising Sun (2011); South Africa – Supreme Companion of O.R. Tambo (Gold) (2015); and France – Commandeur de la Légion d’honneur (2016).

Mr. Mulroney has also been presented with the Global Citizen Award by the United Nations Association in Canada (2001), the Woodrow Wilson Award for Public Service, and the Christian A. Herter Memorial Award for his leadership that contributed to “better international understanding.” In 2006, Mr. Mulroney was chosen by leading environmentalists as the greenest prime minister in history. He has also received the George Bush Award for Excellence in Public Service (2018) and the James A. Baker III Prize for Excellence in Leadership (2019), and was inducted into the Canadian Disabilities Hall of Fame for his extraordinary contribution to enriching the quality of life for Canadians with physical disabilities (2018).

A strong advocate for nurturing future generations of leaders, Mr. Mulroney spearheaded the largest fundraising campaign in the history of StFX to establish the Brian Mulroney Institute of Government and an undergraduate program in Public Policy and Governance.