St. Francis Xavier University is pleased to announce that Dr. Donald Abelson has been appointed the founding Director of the Brian Mulroney Institute of Government and the inaugural ECN Capital Chair in Canada-U.S. Relations.

A specialist in Canadian-American relations, U.S. politics, and U.S. foreign policy, Dr. Abelson brings over two decades of extensive scholarly and research experience to the position, particularly around the role of think tanks and their efforts to influence public opinion and public policy. He comes to StFX from Western University where he spent the last 25 years of his career in various roles including professor and chair, Department of Political Science, Director of the Centre for American Studies, and Director of the Canada-US Institute.

He has also authored over four dozen articles and chapters that focus on think tanks, free trade, environmental cooperation, and foreign policy. In addition, he is a regular commentator on CBC, CTV, TV Ontario, and other major media outlets.

“Dr. Donald Abelson is an inspired choice for the ECN Chair in Canada-U.S. Relations and founding Director of the Mulroney Institute of Government,” said Dr. Richard Isnor, StFX Associate Vice President, Research and Graduate Studies and interim director of the Mulroney Institute. “He is widely recognized as a leading Canadian and international scholar in the areas of think tanks and their influence on public policy, particularly in Canada and the United States. He has a proven track record in leading policy-oriented research centres at Western University and will be an incredible asset during the critical start-up phase in the development of the Mulroney Institute of Government at StFX,” Dr. Isnor said.

Dr. Abelson said he is very much looking forward to the role.

“It is an incredible opportunity to be able to come to StFX and be the founding director of the Brian Mulroney Institute of Government. It speaks to my research and teaching interests in the field of public policy, which I have undertaken over the last 25 years, especially the work I’ve done on the role of think tanks in Canada and the U.S. I’m committed to putting many of the ideas I have analyzed into action and to work with the other research chairs to produce timely, policy-relevant and academically rigorous research,” he said.

Not only is it exciting to step in as the Institute’s founding director and to occupy the only endowed research chair in the country devoted exclusively to studying the relationship between Canada and the U.S., but Dr. Abelson said he is also very keen to contribute to the new and innovative four-year undergraduate program in Public Policy and Governance at StFX. He noted that this program, launched in 2017, “will continue to attract bright and energetic students interested in taking on leadership roles in government, the private sector, and in the not-for-profit community.”

“My vision is three-fold: to make the Brian Mulroney Institute of Government a national and international centre for expertise in public policy research and analysis, and to help policymakers at all levels of government, leaders in the private sector, and other individuals concerned with a range of public policy issues, to think more critically and methodically about how important economic, social, and political developments in Canada and beyond our shores affect this country’s vital interests,” he said.

But another part of this vision is to ensure students in the Public Policy and Governance Program are provided with the best possible training and opportunities to become leaders.

Dr. Abelson said one of the things that sets the Institute apart from other public policy centres and programs in Canada is the focus on leadership and on the important skills students require to succeed both in their university studies and in their transition to the workforce. He said the commitment several donors have made to supporting student bursaries and scholarships is vital.

“A lot of the fundraising for the Brian Mulroney Institute of Government has focused on setting aside money for student bursaries and scholarships, and that really should be and continue to be a key focus so that qualified students are able to participate in this unique program.”

While professionally this is an incredible opportunity, more importantly, the Brian Mulroney Institute of Government and the undergraduate program it houses will further strengthen the reach and global impact of StFX, said Dr. Abelson. “This kind of investment which recognizes the importance of research, undergraduate training, and leadership will pay huge dividends for generations. It’s a transformative undertaking.”

Dr. Abelson said the creation of the Institute speaks volumes about Prime Minister Mulroney’s life-long commitment to StFX and his enduring belief in the value of education and public service. “The Institute bears Prime Minister Mulroney’s name,” but as Dr. Abelson said, “in so many ways, it also reveals his soul. Mr. Mulroney’s life changed forever when he came to this picturesque campus, and I suspect that nothing would make him happier than to know that future StFX students will graduate with the confidence and determination to leave a positive and lasting impact on Canada.”

Dr. Abelson also took time to credit all those at StFX involved in drafting the blueprint for the program and the institute, noting the incredible job they did setting up courses, internships, and scholarships.

“The foundation they’ve established is truly amazing,” he said. “They really understand how public policy works and what kind of program is needed to train students. I am deeply honoured to come to campus to work with the people here.” 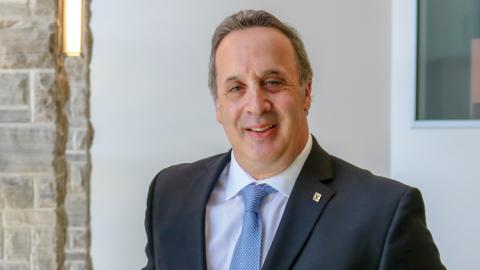