NEGOTIATING ARCTIC SOVEREIGNTY: TRENT STUDENTS TRAVEL TO STFX FOR MODEL NEGOTIATION ON THE STATUS OF THE NORTHWEST PASSAGE 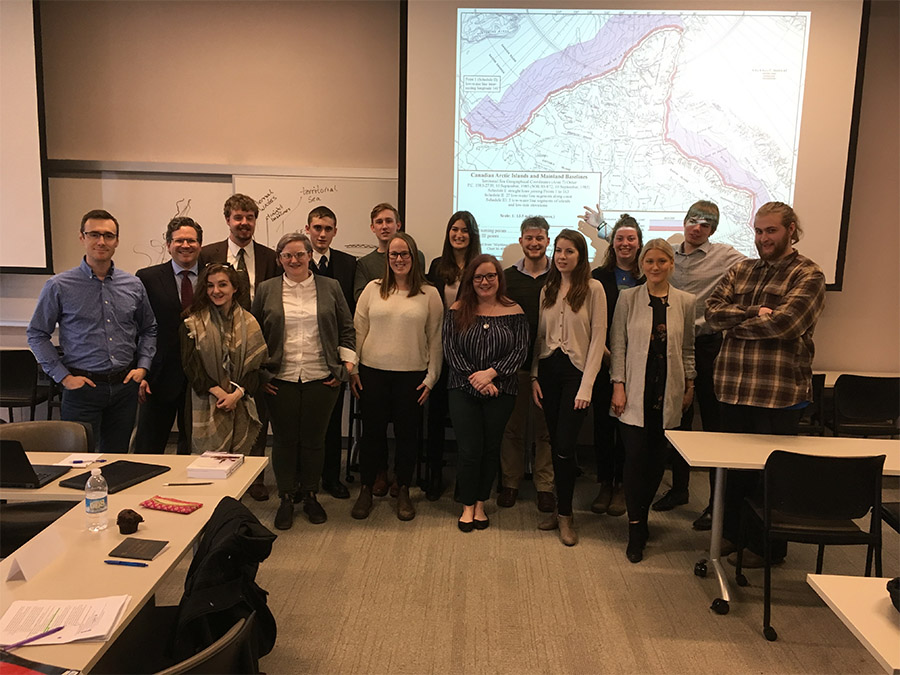 After weeks of preparatory research to apply insights from Northern history, Canadian Studies, and international law to a simulated crisis in Canada-United States relations, five senior undergraduate students from Trent University travelled to Nova Scotia this past weekend. On March 16, they faced off against student counterparts from StFX in an all-day mock re-negotiation of the response to the Polar Sea crisis of 1985–86–a tense round of bilateral discussions after a US Coast Guard icebreaker transited the Northwest Passage (which Canada considers its historic internal waters subject to its full sovereignty) without Canadian permission.

The Trent students, mentored by Canadian Studies professor and Canada Research Chair in the Study of the Canadian North, Whitney Lackenbauer, played the role of the Canadian delegation, while nine undergrads from StFX represented the United States. The StFX students were mentored by Dr. Adam Lajeunesse, the Irving Shipbuilding Chair in Arctic Maritime Security Policy at StFX.

“Students who had focused their preparatory readings on legal affairs carried on a spirited debate over applicability of Canada’s historic waters claim, its straight baselines, and an alleged international strait running through the Arctic Archipelago,” he noted. 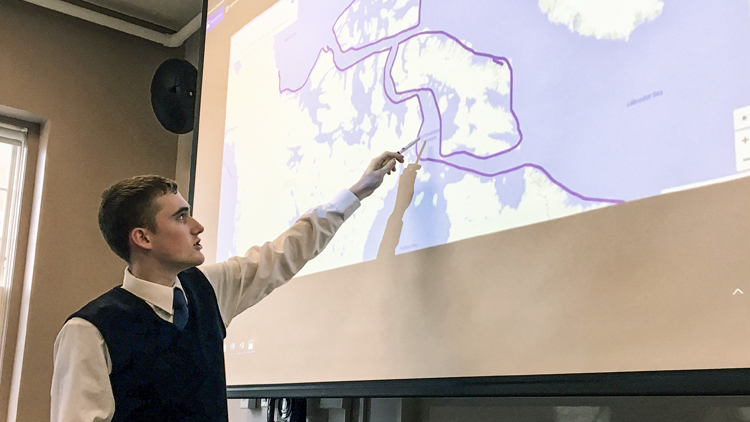 Others “displayed a broad understanding of global security concerns, sought ways to sidestep sovereignty issues to meet Canadian environmental regulatory needs without denying American freedom of navigation, and debated questions of Inuit usage and human security that anticipated the debates leading to the creation of the Arctic Council in 1996.”

The organizers said the point of the exercise was to energize students and encourage them to explore scholarly literature and debates on Canadian sovereignty and the myriad issues surrounding it, including security, transportation, economic, environmental, and Indigenous dimensions. Then they applied their knowledge to a historical scenario, engaging in discussions and crafting proposals to simulate how negotiators might overcome competing priorities and interpretations of law in real-world deliberations.

“The students’ success in the exercise was best demonstrated by their organic development, over multiple break-out sessions with their peers, of a series of compromises and proposals which closely tracked what Canadian and American negotiators actually tried in the late 1980s,” Dr. Lajeunesse observed. “Both sides equally understood their respective nations’ ‘red lines’ and each of these proposals failed in light of those immovable national requirements.”

He said, in the face of repeated and frustrating failures to arrive at a compromise, the American (StFX) delegation brashly threatened sanctions and aggressive naval challenges. The Canadians (Trent) dared the Americans to take them to the International Court of Justice. “Just when it looked like the negotiations were doomed to collapse,” Dr. Lackenbauer recounted, “the two parties abruptly changed course and decided to set aside irreconcilable differences so that they could pursue a more practical and pragmatic arrangement.” After a rapid series of back-and-forth concessions and offers, students produced a framework for Arctic cooperation which mirrored, in a surprising number of respects, the Arctic Cooperation Agreement that Canadian and American diplomats agreed upon in 1988, Dr. Lackenbauer said. That neither team had been given this document or had seen it going into the event highlighted just how thoroughly they had assimilated their respective national positions, needs, and requirements.

Drs. Lackenbauer and Lajeunesse hope that this will become an annual or biennial event, with students exploring different scenarios that encourage them to explore the complex interaction of political, environmental, socio-economic, legal, and cultural variables in international negotiations.